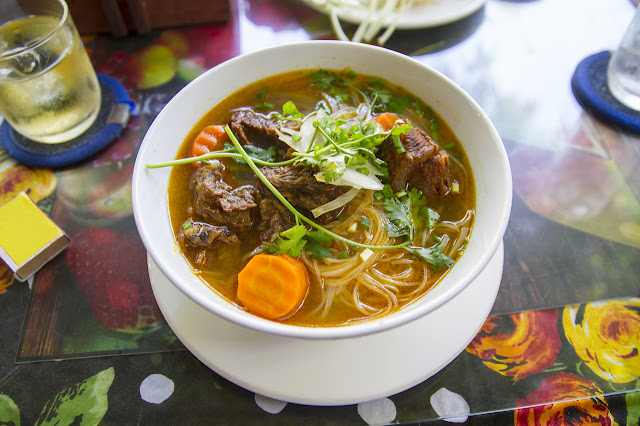 Vietnamese  Beef Pho Noodle Soup is the most typical dish of the cuisine of Vietnam, it is a clear soup of noodles or rice noodles, with meat, bean sprouts, and some fresh herbs. On the streets of Vietnam, we can find hundreds of street food stands that serve this soup “Pho” of noodles for breakfast, lunch or dinner. This dish made with rice noodles and pieces of meat with a very nutritious broth that you will love.

There are two more typical versions of the Pho soup, with chicken or “Pho Ga” and with a veal to “Pho Bo“, like the one we are going to prepare today. Also according to the place of Vietnam where we test it may vary a bit. The biggest difference between the Pho from the north and the south will be, the one from the south has more accompaniments, such as sauces, herbs, and vegetables, I think it is the best-known version outside of Vietnam, while the one from the north is usually accompanied by some segments of lime and a little bit of cayenne pepper cut.
What does Pho mean Vietnamese?

The pho is a food of Vietnamese origin, which can be served at any time of the day. This dish is prepared based on rice noodles and pieces of meat, in addition to a nutritious broth commonly prepared with meat and beef bones, fish sauce and some condiments.

How to get the Pho to have a clear soup:

This is one of the main characteristics of the Pho soup, the first thing we will do is boil the bones and the meat for 5 minutes and that first water we will throw it, we will clean them well of all its impurities and now if we cook them over low heat together to the rest of the ingredients.


The smoked taste of Pho soup:

This is another characteristic of the Pho, it is achieved by grilling the onion, shallot, and ginger. Once they have burned on the outside and with the help of a knife, we will remove the blackest parts, leaving only a little, so we will get a very original smoky taste point of our Pho soup.


What is accompanied by the Pho?

Restaurants serving soup “Pho” always have at the tables a variety of seasonings with the flavor will be adjusted from soup to taste, these condiments include among others Sriracha sauce, Hoisin sauce, also accompanied by bean sprouts, Thai basil, coriander and some segments of lime. In addition, if you like spicy, it is also accompanied with cut green Cayenne pepper. 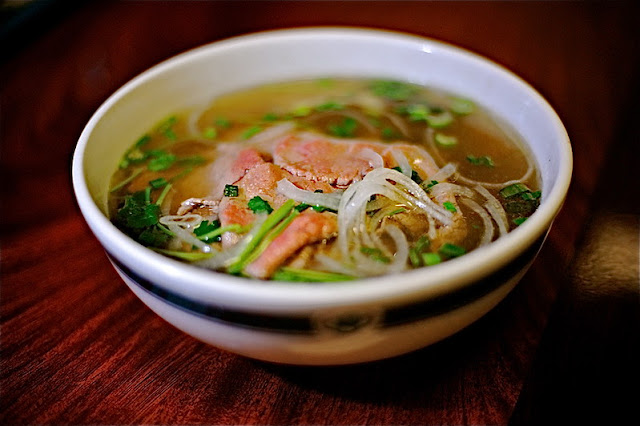 How do you eat Pho soup?

Once we have the bowl with our soup and all the accompaniments next to it, the first thing we will do is add to our bowl a good amount of bean sprouts, then fresh herbs such as basil or coriander leaves that we will break a little by hand and finally we will put a few drops of lime on top. As for the Hoisin and Sriracha sauces, some people like to put a little of each of them directly in the soup, I personally like to put them together in a tiny bowl and go dipping the pieces of meat and vegetables.


Here is a recipe for you to prepare the traditional Pho at home and enjoy different, rich and nutritious flavors at your table:

How To Make Vietnamese  Beef Pho

For the pho broth

1. On the cooktop, grill the onion, ginger,the cinnamon sticks, star anise and garlic in a small skillet over medium heat,5 minutes.Once onion and ginger slightly scorched, remove the heavily burned parts and cut them into large pieces.

2. Fill half of a large saucepan with water. Add beef and bones and heat over medium heat until they boil. Remove from
heat.

3. Rinse meat and bones with clean water, and transfer to a different pot with water.

4. Add spices, onion and ginger, garlic, sugar, salt and fish sauce. Bring to a boil, skimming off any foam and let cook for an hour and a half more, until the meat is tender.

5. Remove the pieces of meat and pass the broth through a fine strainer so that not a single solid remains.
6. Try the broth and, if required, add more flavor with a little more sugar and fish sauce. Apart.

1. In a saucepan with boiling water, put the pho to cook according to the instructions of the noodle. I recommend you do it only for 30 seconds so that it is bleached and al dente.

2. Strain and transfer to a bowl for pho. Pour the very hot beef broth and, on top of it, distribute the beef (raw, cooked in the broth), the bean sprouts, the coriander, the mint and basil leaves, the chives and the chili slices.

3. At the time of eating, add a few drops of lemon to your liking and enjoy. 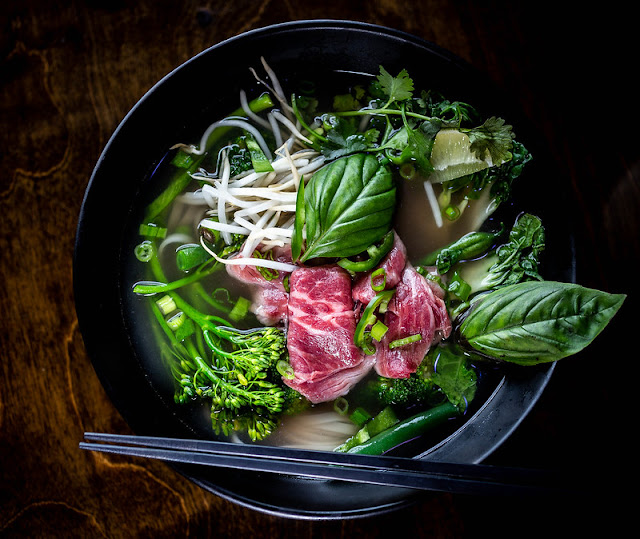